We met Pro Photographer Terrell Lloyd, the official team photographer of the San Francisco 49ers, at WPPI in Las Vegas.

See how we turned his cool stock photos into an awesome photography slideshow.

When he’s not honing his craft on the grid iron, he operates a successful photography studio specializing in wedding, portrait, commercial, and corporate photography. He also finds the time to photograph San Jose State University Athletic events. As a huge football fan, it was an absolute pleasure to chat with Terrell about his experiences shooting in the NFL. 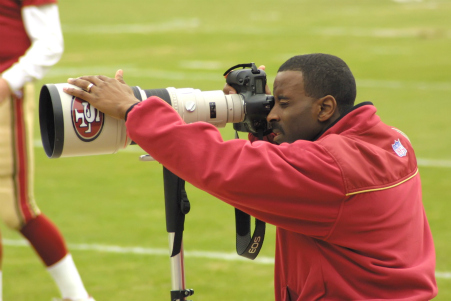 Terrell Lloyd grew up in the Haight district of San Francisco, loving football and especially his hometown 49ers. He used to take 49ers pics out of his local newspaper and make scrapbooks of his favorite players. Now he’s the source!

He first stepped on the 49ers football field in 1994 with a camera and a childhood dream. He couldn’t stay more than one game without a publication-affiliation, so he joined a monthly magazine in ‘95 and was granted on-field credentials forever after. In ’97, with the rise of the Internet and everything in the photography industry going digital, he took a chance and bought a $12,000 digital camera, hoping that would give him the edge in the sports photography market.

His big bet paid off and the 49ers signed Lloyd on as team photographer, and 14 years later, he’s a fixture on the sideline. He probably deserves a Gatorade shower or two (but that would damage the equipment).

Terrell tutored Joe Montana’s wife on photography and took the Jerry Rice family Christmas portrait. He also just got back from shooting a BMW corporate event in South Africa, clearly he enjoys playing on the road.

Terrell let us feature his amazing photography in our booth at SXSW. Check it out!

Check out how other pro photographers create photography slideshows with Animoto.